SWOST: 40 Most Powerful Female Athletes of All Time II 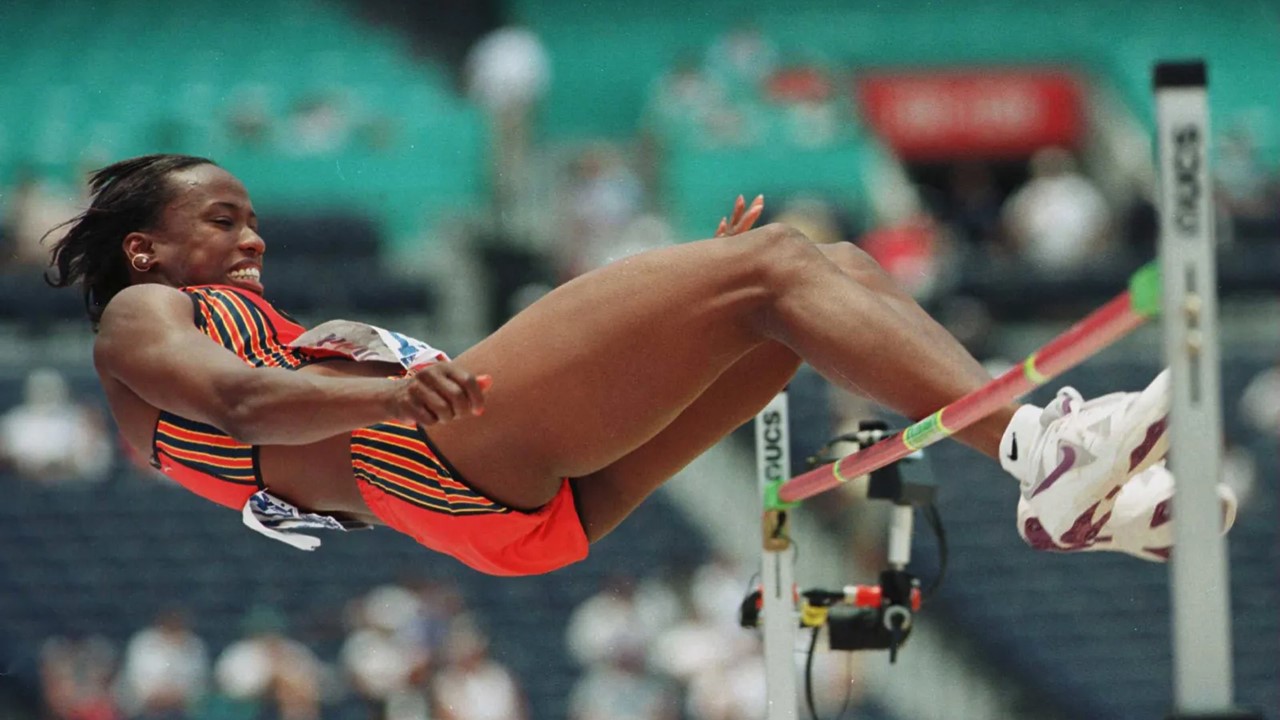 Considered to be one of the greatest athletes of all time, six-time Olympic medalist Jackie Joyner-Kersee broke multiple barriers in track and field during her decorated career. She became the first athlete to score over 7,000 points in the heptathlon (a seven-event contest testing a wide range of skills) and the first athlete to win the heptathlon in consecutive Olympic Games (1988 and 1992). Oh, and her heptathlon world record set during the 1988 Seoul Games? It still stands today. After the 1996 Olympics, Joyner-Kersee had a short stint playing professional basketball with the Richmond Rage.

Joyner-Kersee is big on giving back. In 1988, she founded her eponymous foundation, which seeks to help at-risk children; in 2007, she cofounded Athletes for Hope, which encourages pro athletes to become involved in charitable causes; and in 2016, she joined a Comcast initiative to provide internet access to low-income families. A true champ, both on—and off—the field. 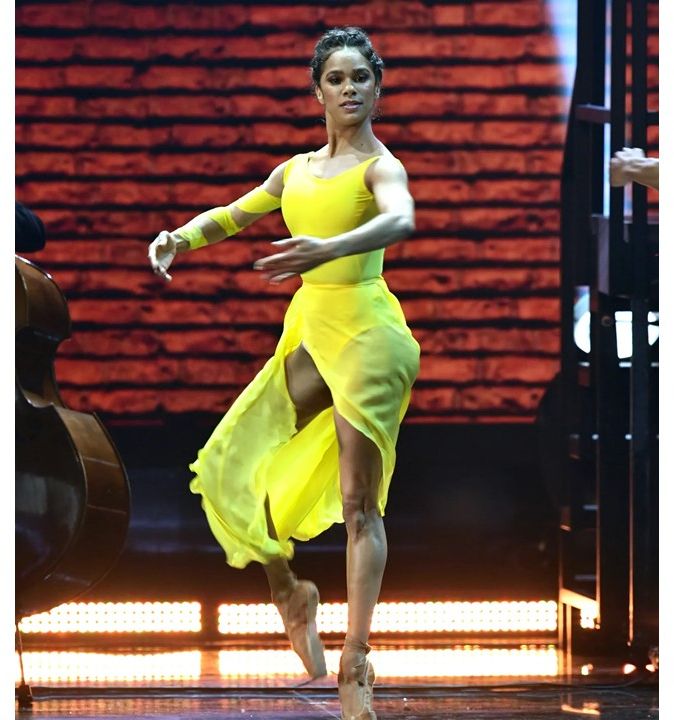 Copeland, who didn’t take up ballet until the late age of 13, is big on elevating the next generation of dancers. She’s served on the advisory committee for the ABT’s Project Plié, which provides training and mentorship to dance teachers in racially diverse communities around the country and in Boys & Girls Clubs. “I was the only African American woman at ABT for a decade, and so much of what I do now is mentoring young minority dancers and trying to be a support system for them,” Copeland told Variety in 2016. It feeds me as an artist and as a person, and I learn more and more about myself and what’s lacking and what needs to be done in the professional ballet world.” 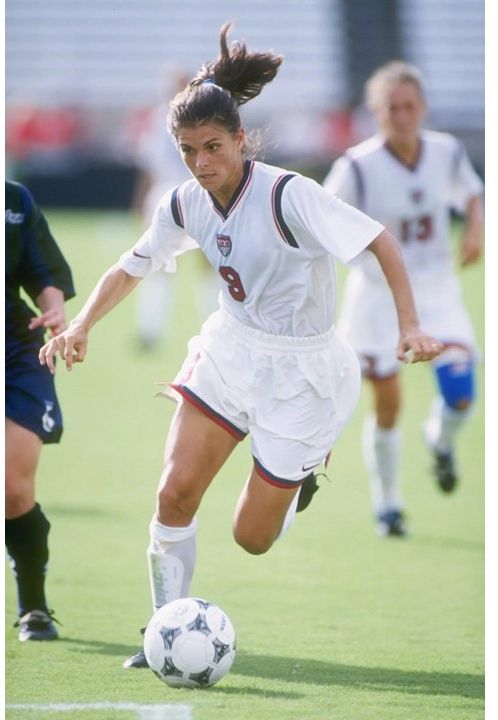 Before the likes of Alex Morgan, Megan Rapinoe, and the rest of the kick-ass USWNT, there was Mia Hamm, the international star of women’s soccer. Hamm, a goal-scoring powerhouse on Team USA, played on the 1991 and 1999 World Cup winning teams as well as the gold-medal-clinching teams at the 1996 and 2004 Olympic Games. During her legendary career, Hamm netted a gobsmacking 158 goals in international competition, a record for any player—man or woman—that stood until 2013, when American Abby Wambach eclipsed it.

Hamm’s dominance on the field ushered in an unprecedented level of media attention for a women’s sports team, especially during the 1999 World Cup. And her popularity, which continued after she officially hung up her cleats in 2004, was akin to the renown of top male athletes. Hamm went on to start her namesake foundation, which aims to increase opportunities for young women in sports and also raises funds and awareness for bone marrow and cord blood transplants. She also cofounded Athletes for Hope with Joyner-Kersee and other athletes. 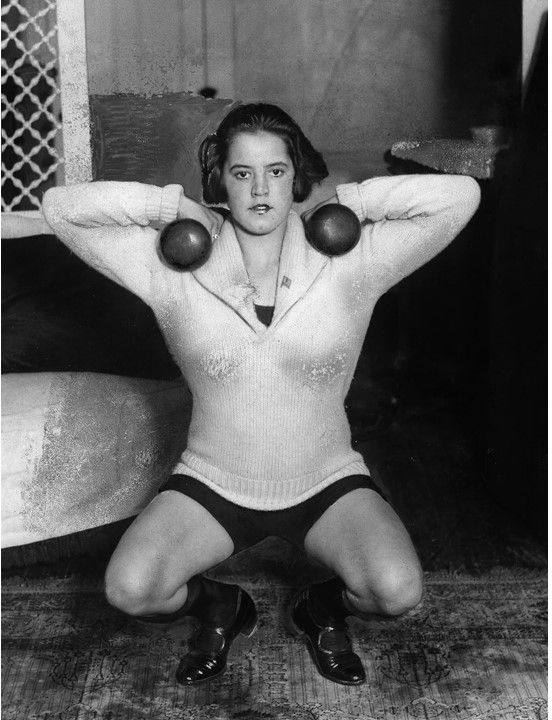 On August 6, 1926, 21-year-old Getrude Ederle battled the cold, choppy waters of the Atlantic Ocean to become the first woman to ever swim across the English Channel. Even more impressive, Ederle recorded the fastest time in history by more than two hours, besting all five men who had previously gone the distance. It gets even more spectacular: Because of the especially rough ocean conditions at the time, Ederle tackled at least 14 more miles than she would have had she been able to chart a straight line (35 versus 21 miles), per the New York Times.

But Ederle’s truly mind-boggling accomplishment was bigger than one single swim. It “made a memorable contribution in an age when many found it difficult to take female athletes seriously,” the Times wrote in Ederle’s 2003 obituary. Among Ederle’s other accomplishments in the sport? Dozens of amateur national and world records, plus three Olympic medals in swimming. After her hearing was permanently impaired during the record-breaking swim, she also went on to teach the sport to deaf children. 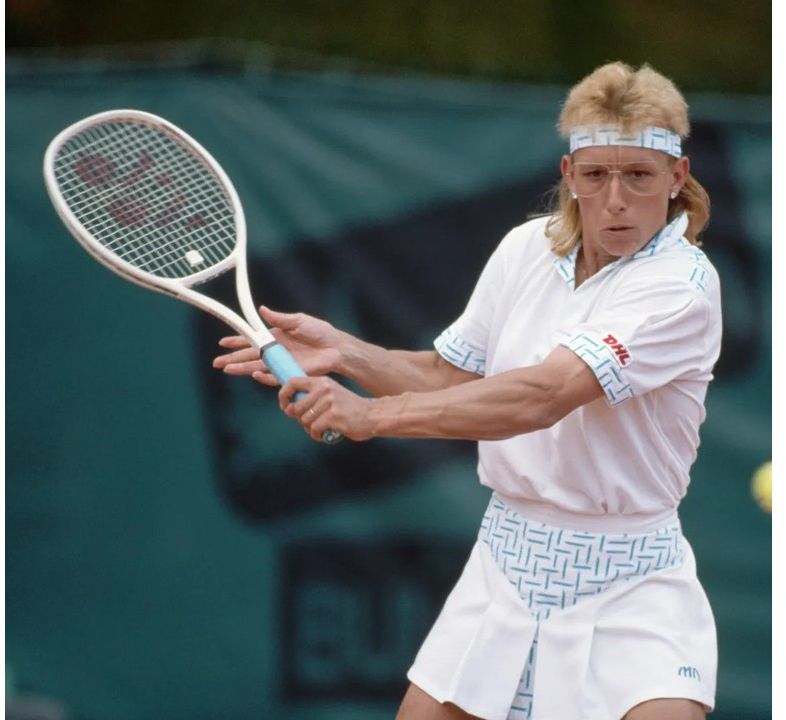 As one of the best tennis players in history (Billie Jean King once called her “the greatest singles, doubles, and mixed doubles player who ever lived”), legend Martina Navratilova made an outsize impact on the sport. The Czech-born International Tennis Hall of Fame inductee, who defected to the U.S. in 1976, finished her career with an astounding number of wins: 167 singles tournaments, 177 doubles events, and 2,189 matches. That’s the most any player, male or female, has earned since the Open Era in tennis began in 1968.

Beyond her prowess on the court, Navratilova has also made important contributions to the LBGTQ+ community. As one of the first openly gay athletes, the tennis champ has advocated for equal rights and supported numerous charities that back the cause. Those efforts, in turn, have helped foster acceptance for today’s gay athletes. 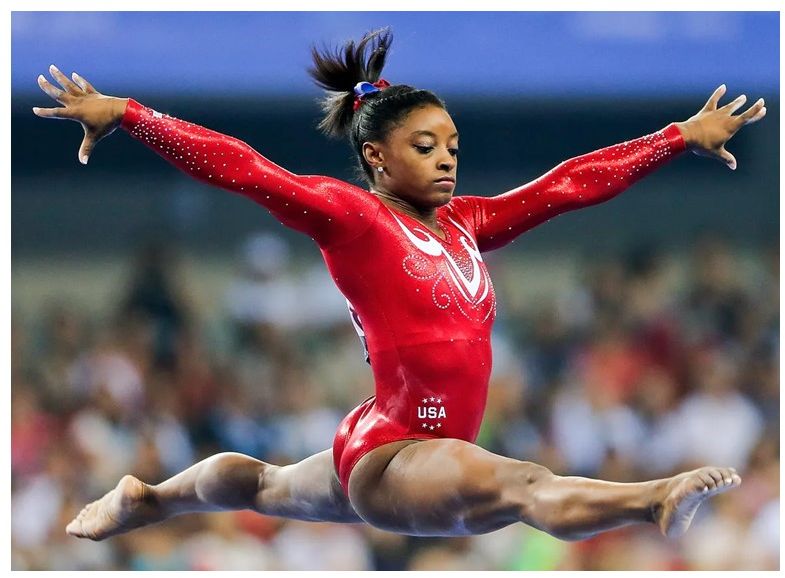 Last October, Simone Biles officially secured her status as the GOAT of gymnastics. With 25 world championship medals to her name (and counting), the 23-year-old American now owns more hardware from the global competition series than any gymnast, male or female, in history. Her talent is so insane—and unprecedented—that she’s already had three different moves named after her.

Beyond Biles’s mesmerizing, gravity-defying performances, she’s also a fierce believer in women confidently celebrating their accomplishments—without apology. “I’ve won five world titles, and if I say, ‘I’m the best gymnast there is,’ [the reaction is] ‘Oh, she’s cocky. Look at her now,’” the five-time Olympic medalist told USA Today last fall. “No, the facts are literally on the paper. I think it’s important to teach [young girls] that.” Louder for the people in the back, please. 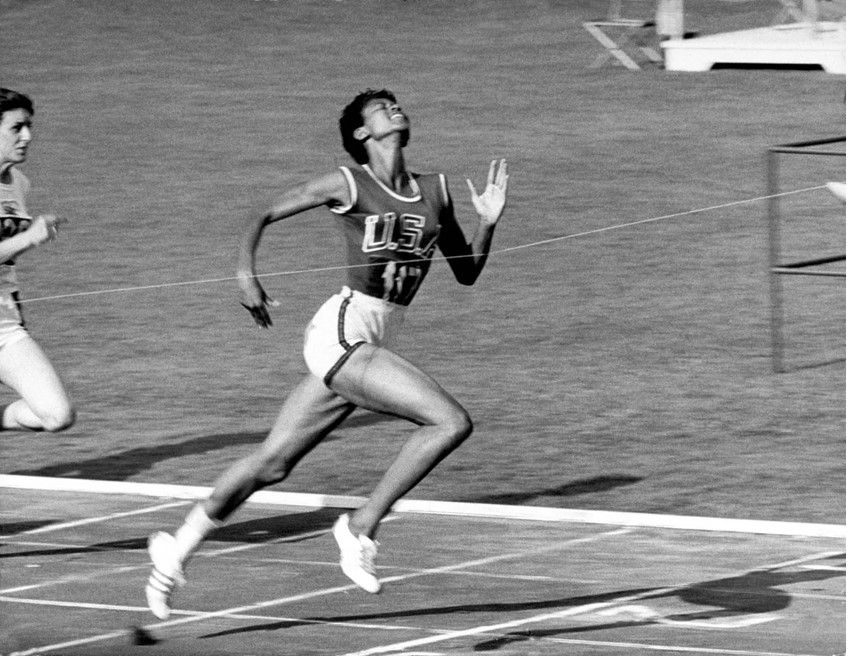 At the 1960 Rome Olympics, sprinter Wilma Rudolph became the first American woman to win three gold medals in a single Olympics, sweeping the field and breaking records in the 100-meter, 200-meter, and 4x100-meter relay. “She was very popular in Rome and credited with stimulating the popularity of track and field among girls and women,” Welch tells Glamour.

As her New York Times obituary noted, Rudolph “became America's greatest female sports hero since Babe Didrikson Zaharias a generation earlier.” Rudolph’s success is even more notable when you consider the fact that the decorated athlete almost died as a four-year-old after contracting double pneumonia and scarlet fever. The illness paralyzed her left leg, and she didn’t walk again on her own for years, per the Times. After overcoming physical challenges early in life and soaring to her illustrious athletic career, Rudolph established her eponymous foundation to support young folks in underserved communities through sports and academics. "If I have anything to leave," she said, according to the Times, "the foundation is my legacy." 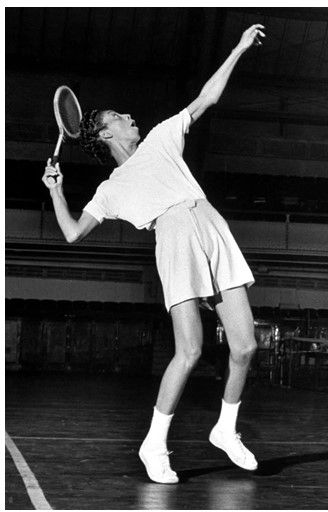 As the first black tennis player to win the French Open, Wimbledon, and the U.S. Open singles championships, American Althea Gibson paved the way for more diversity in a sport with a history of white elitism. “This is not just a player who won a ton of titles—this is someone who transcended our sport and opened a pathway for people of color,” Katrina Adams, the first African American USTA president, told the New York Times. “If there was no Althea, there’d be no me, because tennis would not have been so open to me.”

In 1957, the Associated Press named the New York City native the Female Athlete of the Year, marking the first time an African American had received the designation (the AP awarded Gibson the honor again in 1958). Gibson also made her mark in another sport: In 1964, she turned her focus to professional golf, becoming the first African American member of the Ladies Professional Golf Association. 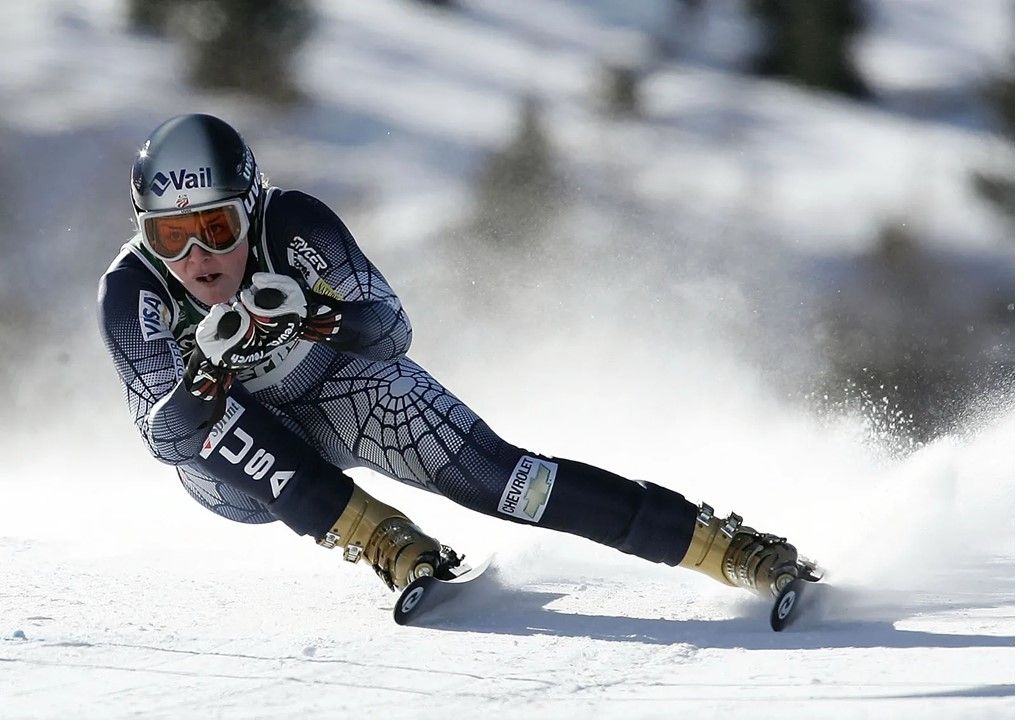 With 82 World Cup victories to her name, Lindsay Vonn is the winningest female skier of all time. Period. The American GOAT retired in 2019 at age 34 after racking up a mic-dropping amount of hardware, including three Olympic medals, seven World Championship medals, and of course, all of those World Cup wins.

With the accolades came hardship—Vonn battled serious injuries throughout her career, including a torn knee ligament (which ruptured twice), a broken ankle, and critical nerve damage in her arm. Yet when other skiers might have thrown in the towel, Vonn refused to give up, forging ahead with unflappable resolve. “I’ve never been afraid,” she told Glamour shortly after announcing her retirement in February 2019. “No, even when the injuries and the crashes seemed to endlessly pile up, I never changed. I never was afraid.” Today, Vonn invests in the next generation through her work with the Lindsey Vonn Foundation, which provides scholarships and programming for education, sports, and enrichment programs. 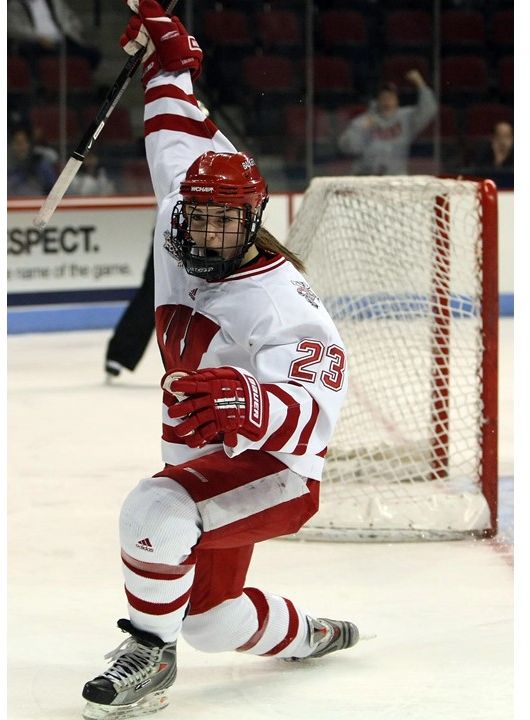 "I hope I'm obviously remembered for my on-ice legacy," Knight said in an ESPN article last year before the PWHPA was launched. "But equally, too, for what I've done off the ice. Sparking change, not just in hockey, but sport and other industries. Whether it's fighting for equal pay or changing the game in how gender or body image is being reflected, my work is just beginning in many ways."