On May 5 of this year, both directions of the Restart Sport Engine in EU RUN competition ended:

2nd direction – according to the marked segment in the length of 6.32 km at a convenient time in the same period.

The aim of this competition was to involve people in physical activities and maintain the spirit of the competition, if not together, then at least remotely.

Although both directions of the competition took place remotely, the award ceremony due to the request of several participants was organized in presence, which gave joy to all the winners, longing for socialization and community, as well as positive emotions.

On May 13, participants of the Restart Sport Engine in the EU RUN competition were awarded separately in two cities in Salacgriva and Limbazi in an order to ensure maximum compliance with all national restrictions. From April 12 to May 5, participants collected running kilometers at a time and place convenient for them through the program Strava profile. The kilometers had to be submitted to the administration of Limbazi and Salacgriva regional sports school. A total of 97 participants took part in this direction of the competition, which were awarded in four age groups. See the winners and full participants results of the competition HERE.

The very next day - on the afternoon of May 14, at Limbaži Canoe base the participants of the remote running competition Restart Sport Engine in EU RUN, who had run a 6.32 km long segment, were also awarded. Participants in this competition were awarded in three age groups. The promotion prize for the very first runner of the segment went to Ieva Ozola, who also represented the local newspaper "Auseklis" at the award ceremony and later described the event in detail in the newspaper. Sandija Zaļupe, the Latvian partner coordinator of the Restart Sport Engine in EU project, received an award from the Olympic Center "Limbaži" for promoting cooperation and renewal of the sports movement in Limbaži. Olympian Kristaps Zaļupe also received a thanks award from OC "Limbaži" for marking the track and popularizing the competition both among the city residents and on social networks. 35 participants responded to the invitation to run the distance of 6.32 km at any time of their choice from April 12 to May 5. Most of the participants ran the segment twice, but some even three times. A participant of the competition Niks Zauls, who won the 2nd place within the men's competition in the age group of 19 – 45, admitted that the track was quite easy and very pleasant, and that he ran it twice. Nick said he would definitely take part another time. The winner of this age group was Jānis Olengovičs, but the 3rd place winner – Māris Ādamsons. Alise Putraima won the women's competition in the same age group, Oksana Groma won the 2nd place, and Dārta Konošonoka won the bronze medal.

Whereas Roberts Glāzers won the young men’s competition the age until 18 and also became the absolute winner of the RSE RUN competition. Roberts also admitted that this segment was quite easy, because he has used to run in mountainous areas on a daily basis. Adrians Zviedris took the 2nd place, but Kristaps Vīksne, whose main sport is kayaking, ranked the 3rd. Līva Puriņa became the winner of the young women’s competition and became the absolute champion of the competition, Krista Bērziņa, whose main sport is kayaking too, won the 2nd place, and Rebeka Zandte won the bronze medal.

Normunds Zauls won the gentlemen's competition in the age group of 46 and above, Andris Mežgailis won the silver medal, but Gatis Lozbergs was the third. As to ladies of the same age group, there were only two participants, where the winner was Baiba Mežgaile, but the 2nd place was won by Liene Lipska.

See the results of all participants of the competition HERE.

An article about the competition and the winners in the local newspaper "Auseklis" read HERE.

PHOTOS from the competition find HERE, but immortalized moments from the race, interviews with participants and award ceremony in VIDEO WATCH HERE. 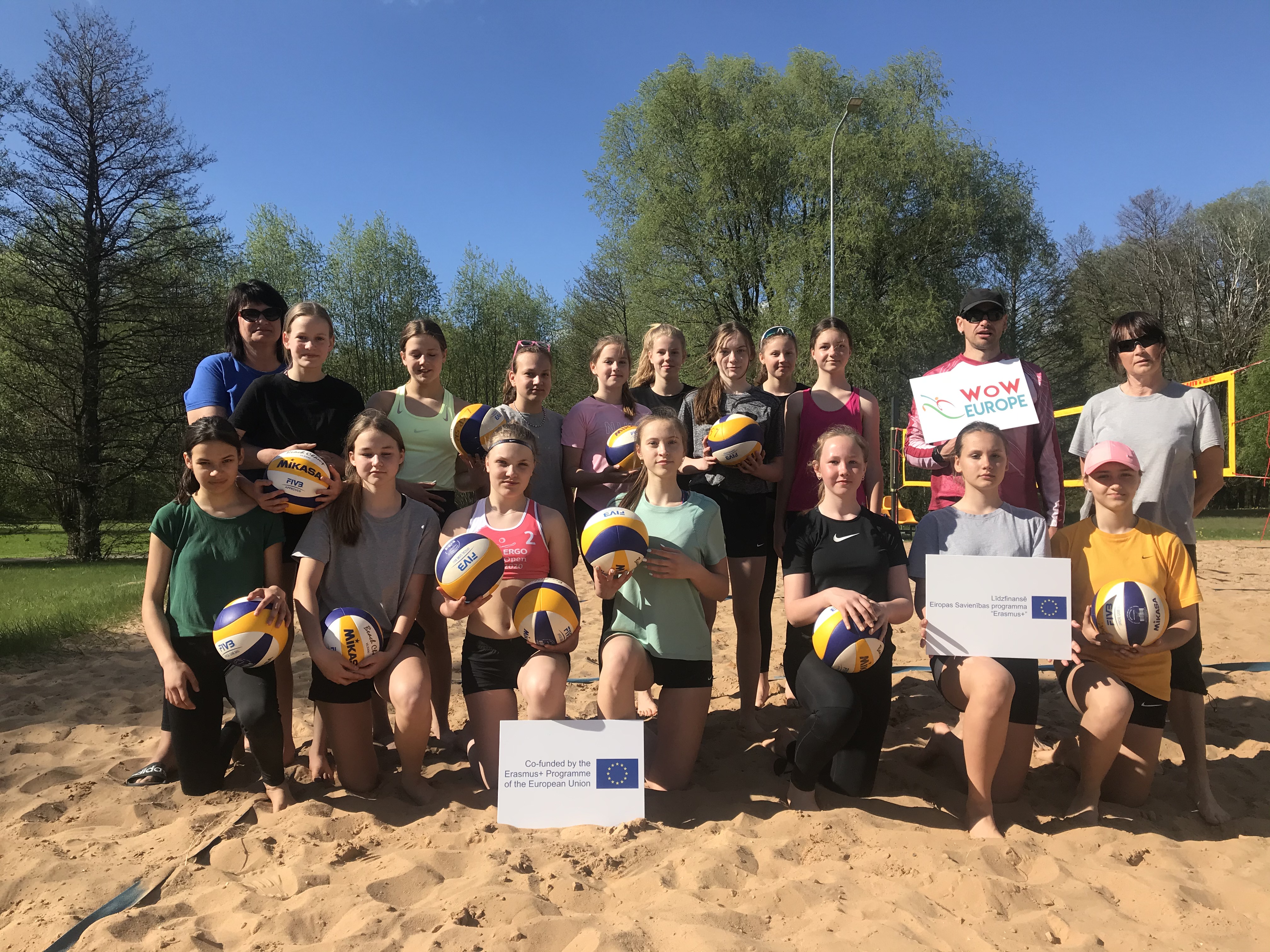 On the 13th May LSIIDP held the 4th activity of "Today I'm Your Teacher of Sport" of the WOW Europe project. Finally, LSIIDP was able to held the planned activity due to the summer weather conditions for the 4th activity was planned on volleyball elements. Since the third activity was so successful in re-uniting a basketball team that because of the restriction period, limited physical activity practices and cancelled competitions, almost fell apart, LSIIDP team decided to help another group - two volleyball groups of 14 - 15 year old girls from Limbazi State Gymnasium and Limbazi Secondary School, that faced similar obstacles as the boys' basketball team.
A famous athlete - an Olympian, kayaker Kristaps Zalupe, held a practice with two volleyball groups regularly trained by two sport teachers Inta Mežgaile and Ineta Sprancmane. The practice gave a fresh attitude towards the regular training process starting with a speech of the Olympian, who said: "Your input and effort in physical activity is significant. Your attitude matters. Let us hope it is all gonna be ok soon, and we will have sport events and normal practices again. You only need to be a little patient. Do go on and help your teachers to go through this as well."
The activity is memorized in a video HERE. And how much fun we had, you can also hear on the recording. We had much laughter, much fun, much sun, and LSIIDP team believed this is a beginning of a new era of the physical activity life of these girls and their teachers.
Thanks to the WOW Europe project, we have proved to ourselves, to the other 9 project participant countries and to the EU Member States, that if you want, you can!

On the 15th April 2021, the ccordinator of the BMX Training to Win project USJ held the second meeting. It covered the following issues:

It was decided that the Battery test will be held in September in Anadia, Portugal during 6th and 10th Septemebr right after the BMX European Cup 2021 that will be held during 4th - 5th September. This will be a good opportunity to make the Battery test wider with more BMX riders in different age groups includin Elite riders. Such an opportunity shall give a value added to the project outputs and dissemination activities.

Furthermore, the project members were to point their project ambassadors - BMX athletes that would promote the project results in difefrent media and give speeches during the Battery Test, which is the first Multiplier Sport Event. The team of Latvia, consisting of the manager Sandija Zalupe, researchers Olafs Lakucs and Ivo Lakucs and a technician Līga Dzene, has pointed the following project ambassadors:

Starting from May 11 the project team of Restart Sport Engine in EU began the second competition on bicycles.

Participants have to ride a 20.6 km long track by bicycle at any time that is convenient for them, recording the time in the program “Strava” Restart Sport Engine in EU BIKE segment. Willing to improve one's score, participants can drive as many times as they wish - the main thing is to do it in the specified time period. Strava segment for cycling may be found HERE. The time during which the segment is performed in the fastest time will be evaluated in the competition. Winners of prizes will be determined in men's and women's categories in three age groups: up to 17 years (including), 18 to 45 years (including), from 46 years and above. Everything you need to record results is a gadget with a GPS function - smartphone or sports watch, and a registered account in the application "Strava". The application can also be connected to smartwatches of different brands. The winners will be announced in June.

We remind you that both on a daily basis and during the activity, the conditions set by the country for limiting the spread of Covid -19 must be strictly observed! We also urge you to be careful and follow all traffic regulations when riding a bicycle. 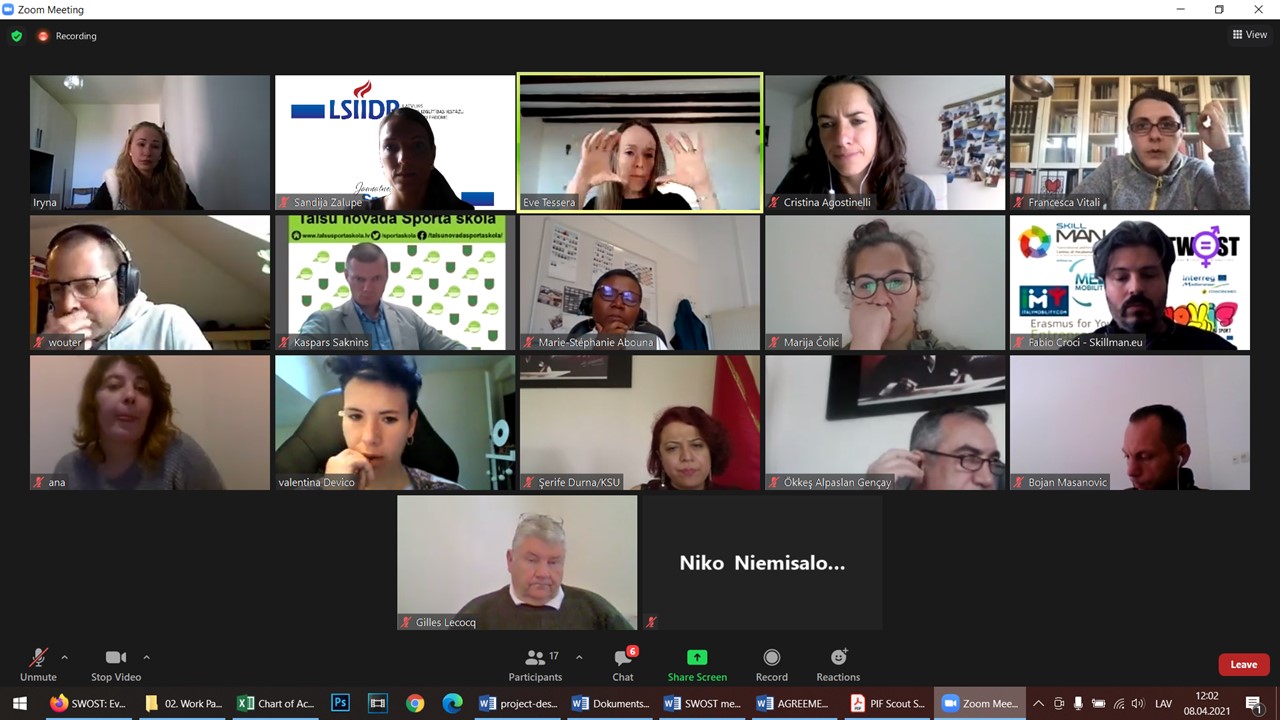 A Day before the monthly meeting of SWOST team, the WP2 team met in a separate meeting to prepare a report for the rest of the SWOST team. The main idea of the work for the report was focusing on the gender equality supplementing ideas of two more projects that are now active: TWOST and FREACO, that makes a total of 22 partners of the 3 projects.

The aims:
1.To identify all the scientific researches and the possible outcomes of similar projects (i.e., good practices) already realized in the EU context on gender stereotypes in sport and,
2.To combine all the positive previous experiences with an aimed standardized methodological approach. One of the good examples already discovered during the preparation of the project proposal is the project ALL IN: Towards gender balance in sport.
3.To define a gender stereotype as the first methodological step. In order to define the gender stereotype, it is necessary to:

In order to achieve the stated aims, a discussion on the Initial Version of the SWOST WP2 Methodology was encouraged: